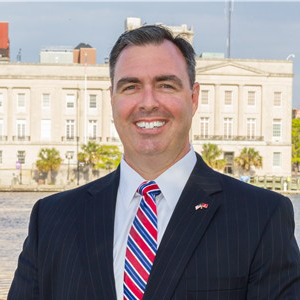 Recently selected by The National Association of Distinguished Counsel as one of the Nation's Top One Percent, Attorney Jason Vaughn has a long history of service and dedication. Mr. Vaughn is a United States Marine Corps veteran, serving as a Military Police corrections specialist. He served at Camp LeJeune and Camp Hansen Okinawa, Japan. He was assigned leadership roles such as Confinement and Release NCO, Watch Supervisor and acting Duty Brig Supervisor. He has numerous letters of accommodation from his commanding officers.  As an attorney, he has been the recipient of numberous awards, including:

Mr. Vaughn has worked with the State of North Carolina Department of Correction and New Hanover County Sheriff's Office where he rose to the rank of Corporal. Attorney Vaughn has gained a vast understanding in many aspects of Law Enforcement in his over 16 years of experience.

While attending North Carolina Central University's School of Law, Mr.  Vaughn worked as an intern with the 5th Prosecutorial District, District Attorney's Office and gained trial experience and handled thousands of criminal and traffic cases.  He also worked with a law firm in Raleigh, NC on Employment issues, Personal Injury, Workers Compensation, Family law, and Social Security Disability issues.  He maintained his law enforcement certification until the day he was admitted to the North Carolina Bar. Mr. Vaughn was awarded for his Pro Bono work by the North Carolina Bar Association.  Mr. Vaughn also volunteers with the North Carolina Azalea Festival and was the 2012 Parade Co-Chair, the 2013 & 2014 Parade Chair, and 2015 Airlie Luncheon Co-Chair.  Attorney Jason Vaughn was the Republican nominee in the 2014 general election for the office of New Hanover County Sheriff after a successful bid in the May primary race.

Attorney Vaughn has dedicated his entire adult life to his country and community.  Let him put his experience to Work for you.